The Challenges New Artists Face When Trying To Catch Their Big Break.

It is a big world out there and one of the parts of that world is the media, the media world is filled up with a great number of industries; Film, Print, Television…But the industry which gets harder and harder to make a name for yourself in every year, is the music industry.

Every year hundreds maybe thousands of bands are formed in different countries around the world, and only a small number of those bands will get their big break and be able to play their music to an audience and become famous. As the years have gone by the amount of artists who will actually get signed and will be able to follow their dreams has declined, it could be because they are not good enough or do not try their best, it could even be because of the breakthrough of the genre Pop/Punk on to the music scene, this genre is getting more popular and with so many bands trying to recreate this style with their own music it’s possible that a record label might only be interested in what is popular right now, which means bad things for bands of other genres e.g. Metal, Punk, Alternative. 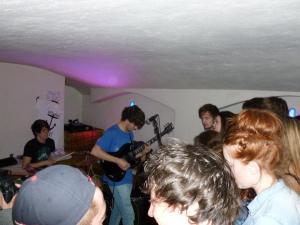 On the other hand because there are so many artists of the same genre appearing these days, record companies will be looking for something new and fresh which they also think an audience will appreciate and sell records. In this day and age to make your name known in the limelight you have to be offering something different which audiences have not witnessed or heard before, it could also be a reinvention of a former genre or a mix up of two genres creating a new one. An example of a new band with a combo genre is the explosive blues rock duo, Hydroshima. When asked about what a record label wants these days Drummer, Tyla Haigh, explains “it depends if they’re in it for the money or not”, if all the label wants to do is sell records then they will go with the genre which is popular now, however “it depends what label it is” says Jacob McClennon, the Guitarist and Vocals of Hydroshima.

The forming of a band is part of the work on the Popular Music course at University College Falmouth, therefore no one in Falmouth knows better than the students on the course the challenges a new artist faces on the scene. Once the band has been formed and have found a gig to play they have to “Promote it” as Haigh states, McClennon then explains how to go about doing this “you could do it on the internet, you could hand out flyers, you could go on the radio station.” 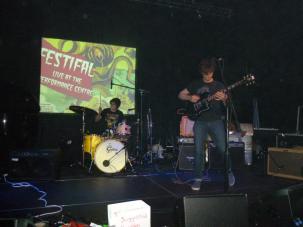 Getting as many gigs as possible is the key to spreading the name of your band through an audience, supporting a band can be just as good as playing your own show “if you’re supporting and know ones heard of you, and then they hear you, they’ll be like ooh I like them” says Haigh. When your band gets a small following the crowd could be bigger as “someone might bring their friends as well” creating a greater audience for a gig adds McClennon.

Another challenge which new artists will face is the money side of music, as we know students are not the richest of people so funding a band will not come easy, and as Haigh puts “if your instruments break” then money is going to have to go into replacing them. However “we get to rehearse for free, we get to record for free” is explained by Haigh as being one of the advantages of being at UCF as they have the Performance Centre.

Some might argue that the Falmouth music scene is rather stale, usually only offering the Princess Pavilion stage (The biggest in Falmouth) to Folk or tribute bands, which with a university close by which has a popular music course, is not the widest range of music and therefore will not attract a majority of students. “It needs a heavy rock scene, it’s mainly just reggae” says McClennon on the Falmouth scene. Although the Tremough Campus has the Performance Centre for these newly formed student bands to preform in, it is not the same as actually getting out there and gigging in small venues and pubs. These student bands need to break into the Falmouth music scene as it needs something new, fresh and as Jacob McClennon clearly states it “It needs us”.