Marvel’s ideas for their comic books have gone above and beyond wackyness in the past, and just when you think that it can’t get any crazier than their Marvel Zombies series, they create one of the greatest crossovers in comic book history. Marvel Zombies vs Army of Darkness. 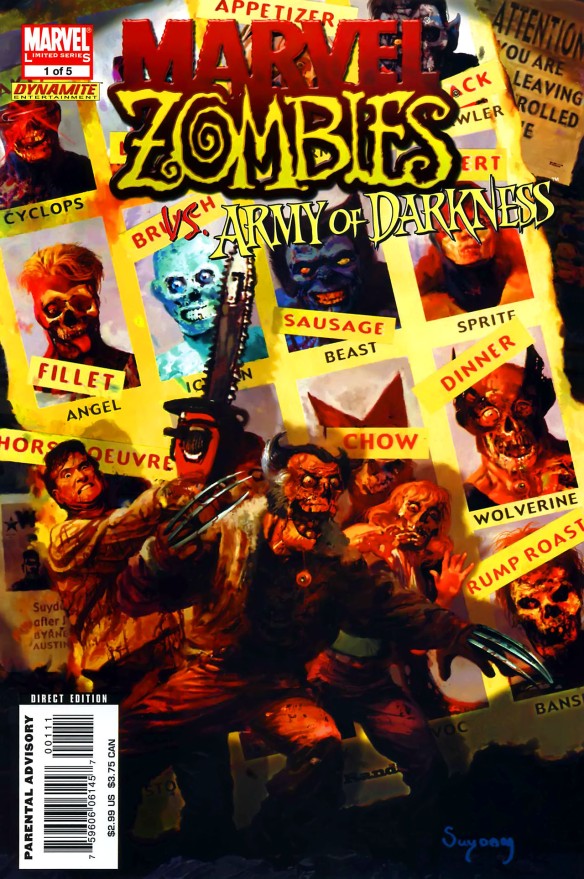 This is a crossover which, until now, only occurred in a fanboy’s dream. For those unfamiliar with the Army of Darkness, it is the army of Deadites (demons) from the Evil Dead film trilogy, which are constantly awoken by the Necronomicon – the book of the dead, and then sent back to hell by the film’s protagonist ‘Ash Williams’. Throughout the films Ash cuts off his hand after it gets infected by darkness, and replaces it with a chainsaw, which is then replaced with an artificial metal hand. However he keeps the chainsaw, and, along with his boom-stick (double-barrelled shotgun) he rids the world of these evil creatures.

Now Ash has fallen through a hole in the sky, and into another universe, quite similar to his own. There is only one major difference, this universe is inhabited by Marvel heroes, and after Ash gets a warning that the Deadites will soon arrive and destroy this world, he realises that it is up to him to warn the Earth’s crusaders about their impending doom. Assuming that he is a complete nut-job, the heroes ignore him, until they realise that he was babbling the truth, but by then it is too late.

Set just before the first Marvel Zombies comic book series, this one shows something that the other did not…the actual infection spreading, and then the world’s population being devoured by the heroes. Which was great because most of the time, in something zombie themed, the best part is seeing the outbreak happening, as oppose to what happens afterwards. It also brings along with it the humour of Ash from the Evil Dead films – his overly arrogant macho-ness and his famous catchphrase “gimme some sugar baby”, although this time spoken by a zombie, the boom-stick makes sure that he does not speak it again.

Ash teams up with the only heroes left: Scarlett Witch, Dazzler and unfortunately Dr. Doom. Together they attempt to stop the infection by using the Necronomicon, and save what’s left of humanity. However a huge twist in the story, forces Ash to work together with an enemy which fans of the films would never think was possible. 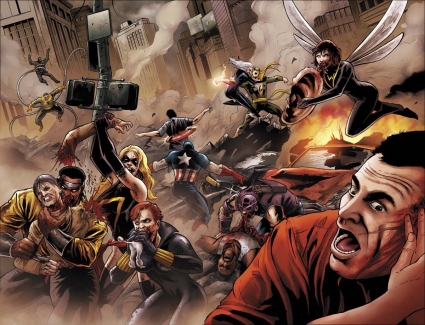 The Karate kid himself, Ralph Macchio, once again is the editor. However this time it was written by John Layman, rather than Robert Kirkman. Before you feel that there might be some slight disappointment, have no fear because Kirkman was the consultant, so he oversaw the entire thing. The images, by Fabiano Neves, are once again rife with colour and detail, down to the last blood-seeping scar, and the vast landscapes which sometimes take up entire pages are just breath-taking. There is so much going on in the scene, you think that you have seen everything on the page and then discover something else going on.

This is a novel that comic and horror film fans alike will be drooling over whilst reading it. From the witty comedic conversation, although short, between Ash and Spider Man, to the classic comic covers which have been altered to display the Marvel zombies and Ash popping up in the background (the cover for the graphic novel actually being the cover from an Uncanny X-Men issue which the upcoming film X-Men: Days of Future Past storyline is taken from), these are just some of the aspects which make this such an enjoyable read, and impossible to put down.